Since attending the UW in the mid-50's (class of '58), Dick never strayed far from the University nor the sport that he tirelessly promoted for more than four decades.  No athlete who ever rowed for Dick could forget the man decked out in his Husky jacket, "W" hat, white towel wrapped around his neck and sunglasses glaring, as he surveyed the armada of shells that often accompanied his launch.  For 20 years Dick served as head of the Rowing program at Washington, collecting 15 Pacific Coast/Pac-10 titles and garnering "coach of the year" honors 3 times.

But Dick was way more than a coach.  As Dwight Phillips noted in his eulogy of Dick to the hundreds gathered at the memorial service at Conibear Shellhouse, he was also a teacher, sage, and sometime bail-bondsman.

He also loved the spotlight, even bringing Hollywood to town in the early 80's to film a movie featuring the crew team.  He was on the "A" list of local sports personalities, as few reporters could resist his colorful explanations of the races or a ride in the launch on a sunny spring morning.  Quotes like "showdown of epic proportions", "let's get this monkey off our back", or "he went from the (out)house to the penthouse" rolled off his tongue like water off a dawg.

But likely Dick's greatest accomplishment was his commitment to opening the sport to any and all comers.  He was instrumental in the creation and development of the Women's program in the mid 70's, and could often be seen in the 80's coaching the famed "Dick's Chicks", a master's women's crew.  Likewise, his men's varsity crew teams consistently would field eight boats per practice, and anytime the freshman would join the varsity, shells would seemingly stretch to the horizon.  And although there were plenty of memorable Varsity wins - the 1970 IRA Championship, the 1977 Grand Challenge victory, or the 1984 National Championship - there were also some major victories by crews that were not the Varsity 8.  Two such wins came at Henley - the 1977 Visitors Cup straight four, made up of spares and JV oars, and the JV eight that stunned the crowd and the US contingent by winning the Ladies' Challenge Plate in 1981.

As Steward Chair Mike Hess remembered as he eulogized his coach and friend, Dick was an "Opportunity-ist".  He gave the opportunity to any and all who would show up at the door.  And that, ultimately, will be the lasting legacy of Dick Erickson.

Thank you for your support of Husky Crew. 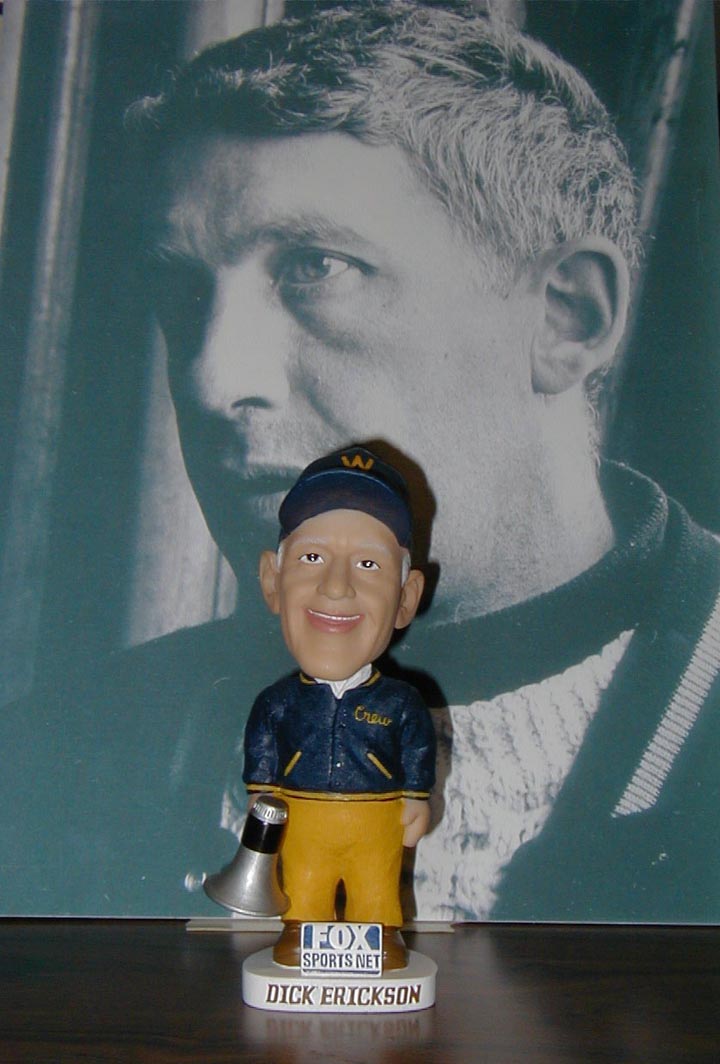 Dick has been immortalized in many ways.  His pictures adorn the shellhouse.  His name graces the shell built in his honor.  A bronze plaque is engraved and hangs alongside the names of Ulbrickson and Conibear.

And now...the Bobblehead!  That's right, thanks to the tireless effort of the few (Le Grande Raoul) and the write-in votes of the many, Dick won the FoxSports bobblehead contest.  This was truly a grass-roots effort, with the idea gaining momentum as it bounced from email to email, concluding in thousands of votes.

Prior to the February 16th UW/Cal men's basketball game (how appropriate) and the February 23rd UW/Oregon women's game, 2,500 Dick Erickson bobbleheads will be handed out free to the first through the door.  Expect a stampede.  You gotta want it.

Chants of "Dick - Dick - Dick" could be heard throughout Hec Edmundson Pavilion on Saturday (2/16/02) as the Husky Men's Basketball team thoroughly spanked a highly favored Cal team 75 - 60.  And although evidence is inconclusive, there may be some truth to the rumor that the Cal team was left mesmerized by the incessant wobbling of 2500 Dick Erickson bobbleheads staring down from the arena seats.

Prior to the game the team presented a framed Husky Basketball jersey to the Erickson family with the number 1 and an engraved plaque stating "Indoors, the water is always calm", a comment that Dick consistently made to the team whenever he would stop by practice.  Following the game, about 70 friends and alumni gathered at the Shellhouse to remember Dick.  The winner of the bobblehead look-alike contest was won by Dick's brother, Tom (see picture below), although the judges were impressed with Dwight Phillip's pipe. 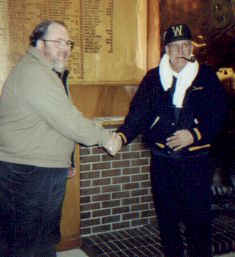 Jeff "Raoul" Benedict summed up the event by noting that "each one of us has our own way to deal with the loss of Dick...this event provides one more way to remember him".

On February 23rd the Women's basketball team hosted the Oregon Ducks.  Prior to the game, the Women's team presented a framed, autographed picture of the team with the inscription "In memory of Dick Erickson - Always a member of the 2002 Husky Women's Basketball Team" to the Erickson family.  The team then went out and defeated the Ducks for the first time in twelve tries, 88-80.  That makes the Dick Bobblehead 2-0 in Pac-10 play.  Any fans lucky enough to own a bobblehead and headed for the Pac-10 Tournament are advised to pack their Dick.

Order your very own Dick Bobblehead today!  A limited quantity is being offered by the Erickson family to help support the Dick Erickson Scholarship Fund.  Click on the bobblehead --->